The George Brown Series is a group of ceramic vessels the artist made in response to the George Brown Collection after an AHRC international placement at the National Museum of Ethnology (NME), Japan, in 2013. Brown accumulated over 3000 ethnographic specimens while serving as a missionary in Oceania between 1860 and 1907. Described as ‘one of the most mobile collections in the world’ (Gardner 1999: 7), it has had a number of homes over the years, exercising the endeavours of a variety of people.

The George Brown Series was inspired by McHugh’s research at the NME which focused on ‘transitional’ artefacts, in which influences from both the originating community and the European colonisers were manifest. His porcelain vessels collage a range of visual and contextual information in order to communicate something of the collection’s complex history. Dutch traders took Sunderland pottery to Japan and it is not inconceivable that some pieces might have made it to Oceania. The George Brown Series exploits this conceit, imagining what a fusion of Solomon Island lime containers and Sunderland pottery might look like filtered through twenty-first century Japan. 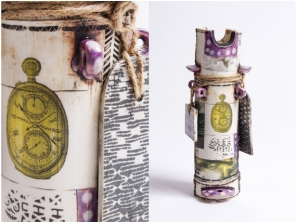