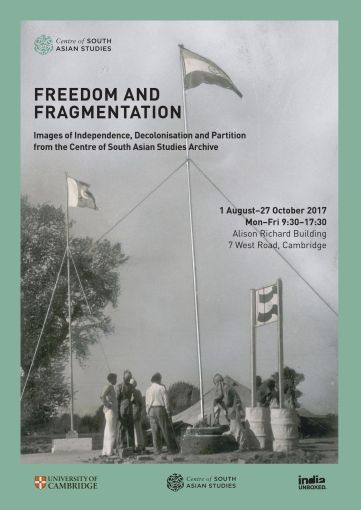 To recognise and commemorate the many meanings of freedom in South Asia in 1947, the Centre of South Asian Studies is holding the first ever public exhibition of its collections. Seventy years on we look back to reflect on the lead-up to and the consequences of independence, partition, and decolonisation. The Centre of South Asian Studies has a unique archive of photographs, maps and films. Across the four floors of the Alison Richard Building, the exhibition will have on display some of the highlights of its collections, most of which are being shown publicly for the first time. These images illustrate the diversity of anti-colonial struggles and independence movements, as well as depict British rule in the twilight of empire.

Please join the Vice-Chancellor, Sir Leszek Borysiewicz, and the Centre’s Committee of Management in launching the exhibition on Friday, 25 August at 4pm. Drinks and snacks will be served.

The exhibition is part of the University of Cambridge Museums ‘India Unboxed’ programme.

A spectacular overview of the exhibition can be found here: